The Company behind Genderring.com is Sparenberg Designworks, a Dutch gallery by industrial designer Joris Sparenberg (1953). The company specializes in the production and distribution of own designs, that are sold worldwide in museums and design shops. The best selling “Vanishing Vase” has been sold more than 130,000 times already.

In the 70s, during his Industrial Design study at the University of Delft, Sparenberg is fascinated by making 3D models with polystyrene and hot wires. Unfortunately, the technology isn’t ready for more complex shapes. Nowadays there are digital design tools, and the technology of 3D-printing offers endless possibilities for modern designers like Joris.

Sparenberg’s 3D designs are characterized by the idea that a single object can unite two complementing contradictions. Also, the customer should be able to incorporate his own wishes in the design.

Working with developer Sietse Dijkstra, Sparenberg created the remarkable 3dWordFlip in 2014. This is the only app in the world in which an ambigram, consisting of two different texts, can be made and printed in 3D. So far, more than 8,000 people have used the 3dWordFlip app. The app will soon get a new destination, and will be able to create personalized necklaces in various valuable metals.

With the Gender Ring, Sparenberg once again seizes a market opportunity. Never before has there been such a complete and new version of the male/female symbol idea. There are nine Gender Rings, and Sparenberg will launch the Ultimate Wedding Ring very soon! 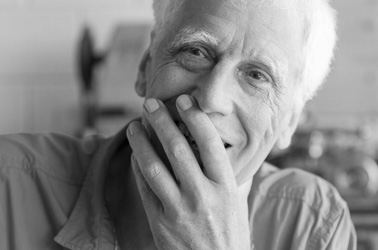 Joris Sparenberg (1953), industrial designer and inventor of the Gender Rings.